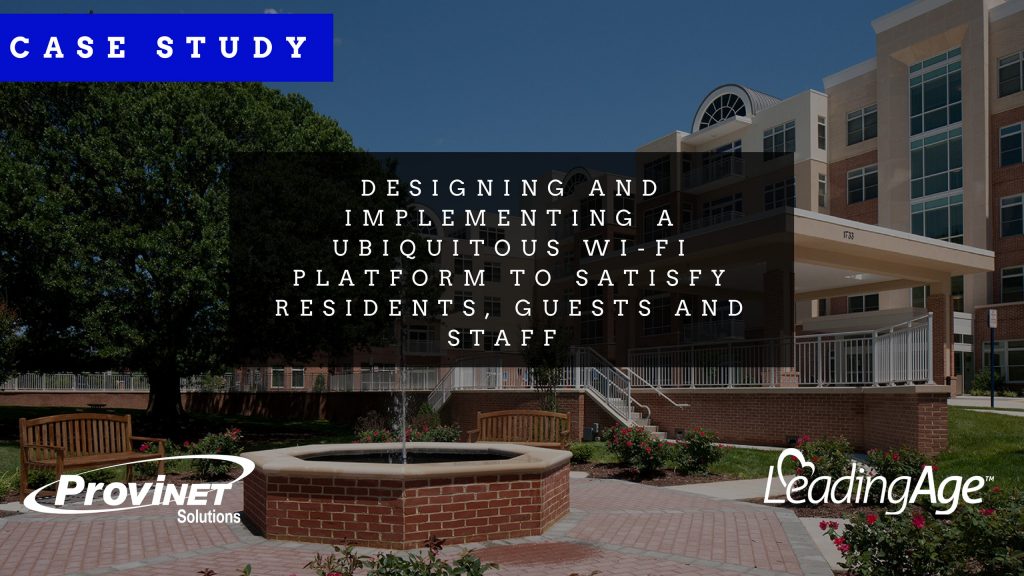 ProviNET Solutions teamed up with LeadingAge CAST and Vinson Hall to provide insight on our Network Overhaul to help fix residents’ Wi-Fi.

Here’s the case study below:

Residents at LeadingAge Provider Member Vinson Hall Retirement Community, an active, resident-focused Life Plan Community in McLean, VA, were not pleased when their television and internet services were inconsistent throughout the campus. To solve the issue and improve access for all, Vinson Hall worked with LeadingAge CAST Supporter ProviNET Solutions to overhaul the network. The result? Hassle-free Wi-Fi and happy residents. A recent CAST case study, “Designing and Implementing a Ubiquitous Wi-Fi Platform to Satisfy Residents, Guests and Staff,” tells how they did it.

After some large-scale campus construction projects, Vinson Hall was deploying different technologies for resident television and internet access, and service was inconsistent across campus. The local technology provider had limited the amount of administration that Vinson Hall could do on the firewall device. Vinson Hall’s Information Technology (IT) team could not log into the firewall to review performance metrics, troubleshoot problems, or change settings.

Residents were stressed, and so were staff who were fielding complaints. Some residents felt there were different classes of residents that caused them to receive service that was better or worse.

Vinson Hall tasked ProviNET with developing a detailed strategy for designing a brand new core, distribution, and edge networking solution, laid out in a star topology with IP schema for every switch that was part of the network, with 10GB per Second networking capability at its core. It included instructions for fiber and copper connectivity to most efficiently route traffic from one end of campus to another. ProviNET also heat-mapped the entire Vinson Hall campus, virtually placing access points in the community from within a software application to evaluate how well Wi-Fi signals will travel throughout the community.

ProviNET leveraged the reliability and cost-effectiveness of switching hardware from Hewlett Packard Enterprise (HPE) and wireless hardware from Aruba Networks (now also part of HPE), which provided a quick return on investment.

The initial phase focused on updating the wired network switching infrastructure to enhance the reliability and capabilities of the network’s foundation. Vinson Hall and ProviNET were able to leverage much of the existing fiber optic infrastructure as part of the overhaul, and the ultimate implementation was a great success.

The next phase was the design and implementation of a campus-wide Wi-Fi system for staff, resident, and guest use. Vinson Hall and ProviNET designed a full solution for the wireless network, including the wireless hardware infrastructure and necessary cabling upgrades required.

ProviNET wanted to make sure the Vinson Hall IT team was able to manage its upgraded IT infrastructure, and for Vinson Hall leaders to be confident they could take control of passwords, access training, or handle any aspect of IT.

Vinson Hall requested that ProviNET work with CTSI, a local vendor familiar with Vinson Hall’s cabling infrastructure, to restructure cable. CTSI was able to share useful knowledge about Vinson Hall’s campus, such as specific locations where cable could be configured. Working together onsite allowed ProviNET and CTSI to strategize on what items would and wouldn’t work. ProviNET also has worked on multiple projects with Aruba Networks and felt confident of success.

Today, Vinson Hall residents can use Wi-Fi hassle-free and reliably connect their personal devices to the internet.

Lessons learned included breaking the project into smaller goal, defining one ultimate goal and strategizing the steps needed to make it successful, communication among all stakeholders, and choosing good partners.